skip to main | skip to sidebar

Well, after 10 days of immigration woes, funneling money to Juarez (I actually think that's why this process takes so long, Juarez needs the money)-- Tiffany, Jose and Eduardo, Jose's 15 year old son who is immigrating with them, have finally left Juarez.

It's kinda ironic that they make everyone with family-type Visas go to Ciudad Juarez, what with all the murders down there!!! Knowing the dangerousness of this town, made it hard for me to not dwell on the risks down there, and hard for me to concentrate on anything else.

This long wait reminded me of our 10 day teacher's strike in '89. We didn't know then either what was gonna happen day by day, there was a lot of misinformation and then no information, money concerns, anxiety and interminable waiting then too, also involving redtape. Tiffany and Jose were fearful and anxious and basically hung out in their hotel room, with Eduardo. What fun!!

They expected to be out of there last Saturday, the 24th of August. But after they had their physicals on the 22nd and passed OK, they then went to get in line at the American Consulate last Friday the 23rd for the interview, An "official" was there telling them that the consulate was closed due to "Administrative reasons". No more information was given, and it was impossible to locate any other "live" people to find out anything.

That same day about 10 people were shot down, although I don't know if the killings or warnings of killings had anything to do with the Consulate closing. I went to my congressman's office but they were not able to find anything out either, and basically not interested in my condemnation of the process.

So finally after a grueling weekend wait, they had their interview Monday afternoon. Tiffany said there were about 5000 numbers given out that day. They were finally interviewed late Monday afternoon, after getting in line about 5:00 a.m., that the visa would be granted, BUT that they would have to keep checking on the Internet to see when the paperwork was ready to be picked up and that it usually took one to four days.

Guess what? It took four days. They finally picked it up Thursday morning, and were able to get a flight outta there, arriving to their home at 1:00 a.m. Friday morning. They talked to some people who had been waiting 10 days JUST FOR THE PAPERWORK TO BE PROCESSED, so at least they only had to wait 10 days total.

After all this, I can understand why we have so many illegal aliens--they make it nearly impossible to immigrate here legally! The transportation costs, fees for filing paperwork, and the room and board costs, airline change fees, while you're forced to wait out the red tape, are huge!!

I give Tiffany a lot of credit for processing these forms herself--she only went to one initial consultation while she was working in El Paso, and then kept careful records herself. They did hire a Mexican lawyer for the custody part, involving Eduardo. I guess her college education helped her with something!

(Names have been changed to protect the innocent.)
Posted by mmm at 12:01 PM No comments:

You have awakened the 21st Centurty Civil Rights Movement

People all over Arizona are speaking out against SB1070. We are on the brink. In November, we'll have a higher turnout than normal for a mid-term election. With over a million unregistered citizens in this state, we have a lot of work to do. But, it's happening- we are signing up new voters everyday!

I found this to be hopeful and positive.

Labels: Celebrating Diversity, Fighting Hate, Not In Our Town

A single experience from Arizona:

On March 16th, I attended a health insurance reform rally where OFA members and Tea Party members clashed in a wealthy part of town. The event took place outside the office of the district's congressman, Harry Mitchell, a Democrat who at the time had not publicized how he planned to vote.

The highly organized OFA members were instructed to smile and wave at cars passing by, loudly chanting: "What do we want? .. "Health Care" .. "When do we want it?" .. "Now" and to explicitly refrain from engaging the Tea Party members in any way.

Supporters out-numbered the protesters at least 3 to 1. All of the Tea Party members were Caucasian, they had no chants, and had no one organizing them as to what to yell or at whom.

Shouts from the Tea Party side ended up being directed at the OFA members (not the passing public). Towards people of color, a woman yelled, "Who bused you in?" Several women continued asking each other back and forth, "Who bused all of them in?" It appeared to be a sincere question. These women honestly just could not believe that supporters of the bill lived in their neighborhood. A large percentage of the remaining shouts consisted of, "Get a job!" and "Welfare mom!" in demeaning and derogatory tones. 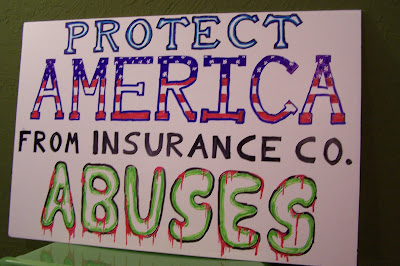 The message was carefully crafted to break through xenophobic mentality. Both my sister and I found it laugh-out-loud funny to watch a Tea Partier smile and take several photos of me, before it finally sunk in that I wasn't on her side. HA.

My subsequent thoughts and reactions:

Had I read Jonathan Haidt's article "What is wrong with those Tea Partiers?"[1], prior to attending the health care rally, I probably would have agreed with almost all of it. I had heard professors interviewed on MSNBC about racism and Obama, and thought, there must be more to it. I would have been sympathetic towards Haidt's argument that, "It is a taboo on the left to 'blame the victim,' and the left is therefore still prone to charging its opponents with racism".

After my experience, however, I now agree with Frank Rich's article "The Rage Is Not About Health Care".[2] To put it in Jonathan Haidt's own terms, if he were to get out among the Tea Partiers, in the heat of the moment, he'd most likely see only his first argument of Intuitive Primacy at work, and little evidence of his second two theories. Sure, some of the Tea Party members might have been conspiracy theorists. But, that didn't seem to be why they were out there protesting health care reform. And, yes, they had posters related to freedom. However, I didn't get the sense that they genuinely felt their personal freedom was in peril. Rhetoric aside, deep down, I don't believe they were out there because they wanted to preserve and fight on the side of freedom. My experience was an exhibition of raw emotion stemming from hatred of "others". In Haidt's world of moral foundations, these Tea Partiers protesting the health care bill were appeared to me to be motivated solely by the virtue of ingroup loyalty/solidarity. In response to Haidt's article "What makes people vote Republican?"[3], Roger Schank speaks of "a distaste and distrust for people not like us" in his "Report From Florida".[4] In my experience OFA members were targeted as outsiders, even when the division wouldn't have been clear in another setting devoid of posters or chants. Anyone against them must live far far away and look very different even if in reality they don't.